As a traveler in South Korea, we do not need to worry about transportation issue. Even though if it is our first time traveling in South Korea, as long as we can read and type basic Korean alphabet, this Apps helps us a lot. All we need to know is the destination that we are heading then everything else is done by this application.

The name of application is “Naver Map” or in Korean it is “네이버 지도” (which basically means Naver Maps). This Google Map-like Korean app can be downloaded for free from Android Market/Google Play (I guess it works on the same way in Apple Store, etc).  Once we have Internet connection and our GPS activated, we are ready to go anywhere we want. Or if someone doesn’t have all-time connection or lack of GPS service, he can search the information beforehand and screen capture/print the provided information.

1. Options based on our need

Once we put out our departing position and final destination, Naver Map will try to figure out possible alternatives to get us to the desired place. For example, I tried to find out the way from Seoul Station (where they have the railroad train, local buses, and subway lines) to a house nearby Seoul National University (the address is 서울특별시 관악구 서림동 103-212). After a while, Naver gave me list of options that I can take.

Some options utilize only local buses, some of them use subway only (or in this case there is no option for this), and there are also alternatives to use the combination of both. The options are normally arranged based on travel time, in which shorter time is put in higher suggestion list. Subway in Seoul normally takes faster travel time but there are more people using it so the subway is very crowded, particularly in going to/back from work time.  Bus provides more space but normally it takes longer time. Therefore it depends on the person who wants to travel. Nonetheless, in most cases we need to use both so that should be okay.

In case of rushing, we might need to take faster transportation mean, which is taxi. Even though the taxi driver in South Korea is pretty honest (meaning they will not try to fool people by going around the streets to gain more money from people) and they have GPS in every taxi, it might be better if we could predict the amount of money we’re using. In some case, we might also want to take bus/subway and then go by taxi in order to find out the best trade off between time and spending. The Naver Map also tells people how long the distance it takes to reach their destination, how much money they need to prepare in advance, and the estimated time to get there.

Moreover, this function is also very useful for car driver, replacing the function of expensive GPS in cars. This Map actually tells the driver where to turn and guides him to the final desired position. It also displays related traffic information, such as CCTV, speed-limit checking camera, gas stations, nearby resting area, etc. 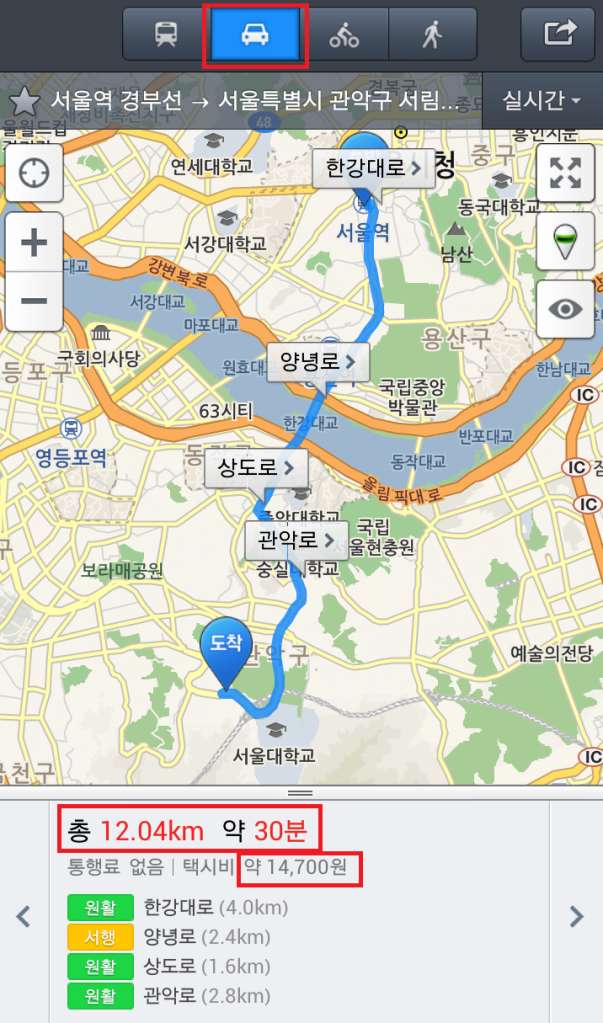 Back to the first feature, after we select our desired option (I normally pick up 1 out of 3 first options), the Map will then display step-by-step process we need to take. In my case, at first I need to walk from Seoul Railroad Station to the Subway station, estimated in 3 minutes if I know the place quite well and walk in normal ‘Korean’ walking speed. Then I need to take subway line 1 (the Blue Line) until Noryangjin Station (노량진역).  Thirdly, I need to walk from that station via Exit Number 1 to the bus stop to get into 5516 Bus that will take me to the place I want to visit. After getting off from the bus then I need to walk around 3 minutes to the destination. Very helpful and easy to use step-by-step instruction. 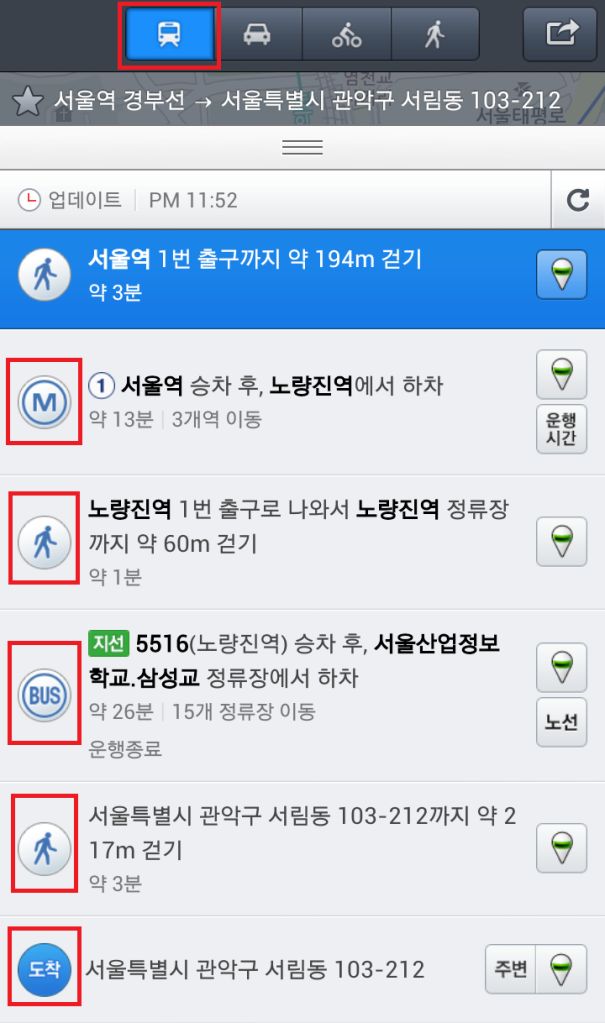 If we have Internet connection, we can activate our GPS to tell us where we are and how far we are from our destination. It is very helpful when we are going to some place that we are not really familiar with, at the time we are taking city bus, or if we need to drive from a city to another city. 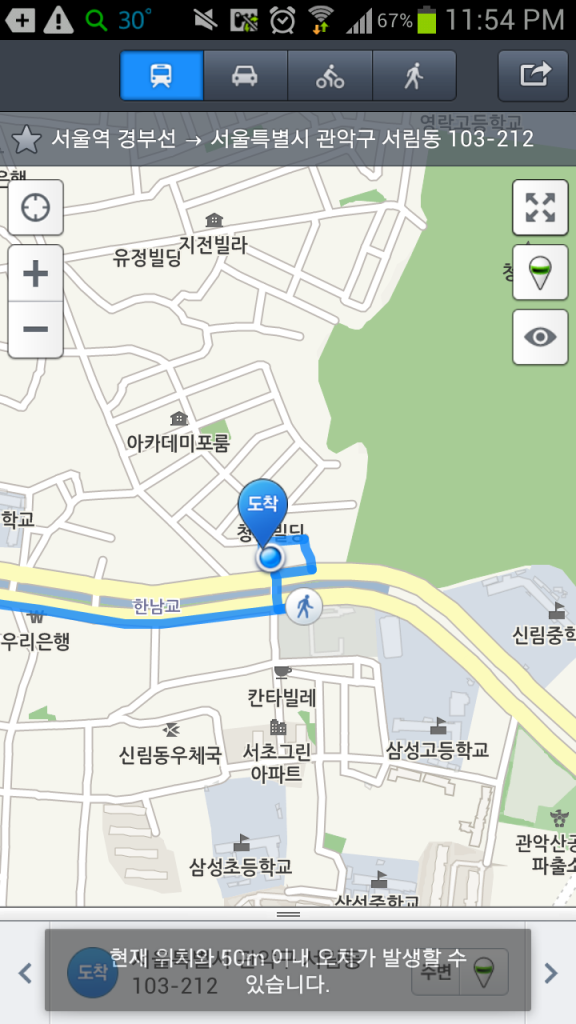 Another helpful information, particularly for those who are traveling with their own car, is the traffic information provided by the Map. As the Korean is very strict with their law, some small traffic law violation might cause huge amount of money lost. Therefore, knowing the speed limit and where the CCTV located is, is very useful.

Have a nice safe trip in South Korea.